Whilst watching a documentary on the life of the eagle I was taken by, not only the gracefulness of the creature, but also its single-mindedness when it came to hunting for food - particularly when hunting food for its young.

The precision of the targeting, the momentary pause as it adjusts for the angle of decent and then the timing and lightening speed of the strike.

If the look in its eyes could kill it wouldn’t need its talons or beak!

This is my rescue attempt at a painting I had disliked half-way through its completion and my feelings about it didn’t change when I finished it.

This is Timothée Chalamet.

A film actor on the rise following his breakout performance in ‘Call Me By Your Name’.

I thought he was either French or Italian when I saw the film but with a name like Timothée Chalamet I plumped for French.

He was actually born and raised in Hell’s Kitchen, New York!

To me, his name is as interesting as his face and I wanted to incorporate it into the painting akin to the old French posters with graphics merged with artwork.

I’m pleased with the finished painting.

Inspired by the poster for the Jungle Book film ‘Mowgli’ I thought I’d have a go and try for a sprawling jungle scene with rivers, waterfalls, glowing sunset, forests, village buildings. Then I added a lion watching a group of unsuspecting bathers.

Its one of those paintings that you can just keep painting until it runs away with you.  Dabbing here, dabbing there.

Knowing that one of my faults, as far as painting is concerned, is over-painting, this one uses the blends of only four colours and stops short of any unnecessary embellishment.

When a high-board diver enters the water he’s travelling at about 35mph.

With both palms face down, one on top of the other, the diver hopes to drive a wedge into the water, thus creating the minimum of splash.

Once the diver has entered the water its a matter of pushing the hands apart to create a braking force against the water.

All this after leaping backwards from a ten metre board and then rotating three and a half times in the air.

The painting is one of Tom Daley, British

The painting looks better the ‘wrong way up’ as I think it confers an almost angelic pose on the subject. 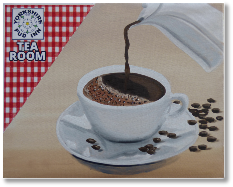 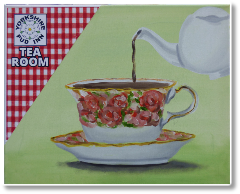 A friend of mine runs the Yorkshire Pud Inn in the Village and asked me if I could do four paintings for the walls in her new Tea Room.

She asked for a tea cup, a coffee cup, a decorated sponge cake and a cake stand.  I decided on a plain cup for the coffee and a rose-decorated china cup and saucer for the tea, a layered sponge with fruit toppings for the cake and a traditional cake stand with sandwiches and fancies.

It was the form of still-life painting I hadn’t tried before.  Instead of bowls of fruit or a vase of flowers, cups, saucers and cake had to make do.  I’m pleased with the bubbles on the coffee’s surface and the indistinct flower pattern on the teacup. 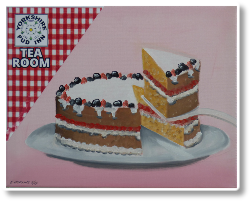 I’ve noticed, when driving through local villages, that there always seems to be a chair, sometimes occupied, just outside the main door to the casa.

The sitter would be occupied doing something; sewing or preparing washing for the line or peeling vegetables ready for the evening meal in the days sunshine.

Today’s occupant has moved inside the house (you can just about see someone inside) but will soon return to peel and slice the carrots.

BACK TO TOP OF PAGE 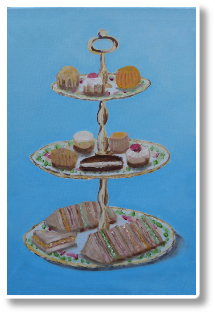